Teen Top announced their plans to return as a 5 member group, finally providing their fans with positive and exciting news.

Teen Top members each uploaded a post on their social accounts saying “#Angel_trust_us” and “You are my angel,” followed by pictures of all five members together.

The pictures showed them goofing around and hugging each other, making funny faces and smiling brightly towards the camera.

Teen Top’s “#Angel_trust_us” caption is actually their reply to their fans’ “#TeenTop_trust_us” hashtag event. Teen Top had announced their return with a 2nd regular album, making their fans excited for their comeback while also showing their love towards their fans with the hashtag.

C.A.P, Chunji, Niel, Ricky, and Changjo are the final five members for the group and will be coming with a new album very soon. 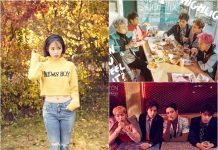