One of the major world history textbooks is to contain more pages that deal with Korean history, especially regarding its cultural heritage and political/economic development.

On July 28, Academy of Korean Studies and Ministry of Education announced that Bedford-St. Martins, which is an affiliate of a major textbook publisher, Macmillan, will release a new edition of their world history textbook with added contents about Korean history.

Throughout two pages, the 2018 textbook will deal thoroughly with the contemporary history of Korea, specifically about the development of democracy and economic development.

In addition, the textbook is to introduce Korea’s unique cultural legacies like Seokguram from Silla Dynasty and Gangnido, which is the oldest world map produced in the country. Also, the renewed textbook will label the country’s east waters both by “East Sea” and “Sea of Japan,” which are the names claimed by Korea and Japan, respectively.

The updated edition of the textbook, Ways of the World, is co-written by professor Robert Strayer from California State University and professor Eric Nelson from Missouri State University. The two professors attended April’s conference launched by Korean Ministry of Education and National Council for the Social Studies (NCSS), which was held to discuss the expansion of Korea-related contents in the U.S. textbooks.

“Most of the world history textbooks used in the U.S. hardly deal with Korean history, or deal only with the Korean War,” said Kwon Young-min from Northeast Asian Education Department of the country’s Ministry of Education. “We will continue to discuss such issues with other publishers so that we can further introduce Korean history and culture.” 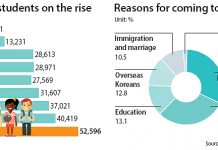