The Oldboy-themed space named “Oldboy Club” is brought to Seoul by the global Irish distiller brand Jameson, as a part of their “Cult Film Club” project, which presents a unique platform where party and film are combined. The event has been offering special experiences to cult film fans across the globe, opening event spaces themed with renowned cult films like “Ghost Busters,” “Friday the 13th,” and “Predator.”

Visitors can enter the movie scene playing the escape room, which is designed based on the cell in which Dae-su is locked for 15 years. Oldboy Club also brings signature food from the film, namely, fried dumplings and sushi. 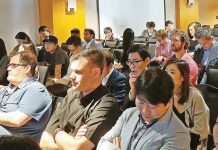