A fashionable elderly lady wearing a blue striped sweater under a white silk scarf visited the Korea Daily office. She is one of the Korea Daily’s readers to take part in its “Meeting a Reader” series. Her name is Young-hee Jeong, commonly known as Monica). It was hard to believe that Jeong is already 83, but her slow, limping strides hinted the weight of times she has endured.

Jeong, who has been a reader for four years now, initially turned down the Korea Daily’s interview request. “I’m an immigrant who lived an average life, settling in the country without many difficulties,” she said.

From North Hamgyong Province in North Korea, Jeong came to L.A. as a 46-year-old with her husband and two daughters in 1980.

Like many Korean-Americans around her age, Jeong has experienced several funny incidents due to her language barrier. For example, it took her a long time to get used to her neighbors saying, “Good morning!” when running into her at the start of every day.

Jeong felt embarrassed and lacked confidence whenever she had to converse in English. That is why she invested so much time to study the language. She had a list of English words taped on the shelf in the kitchen, so that she could study while washing dishes. She also spent time memorizing the words before going to bed every night.

“There was no Korean TV or radio during those days,” Jeong said. “So I listened to American radio all day. That’s how I began to understand the language a bit better and my pronunciation also improved as I kept listening to the same words over and over.”

Jeong’s two daughters—one is now an accountant while the other is a schoolteacher—are both enjoying successful careers on their own.

The effort to learn English paid off for Jeong. As Jeong was taking night classes at Santa Monica College, she received parking tickets on two occasions. One of those tickets fell into her car’s engine room. Jeong obviously did not even know that she had received that ticket, and only found out that she was charged with extra penalty when she was paying for the second ticket that was given to her. She filed a complaint to the court and eventually was able to convince the judge to only charge her for one ticket.

“My husband thought it was a huge feat!” Jeong said. “I was also praised in my class.”

Later on, Jeong was recruited as a model for television advertisements. She
was spotted by a casting director while she was attending an acting class just to learn some English. After making her debut in 2000, she has now become a widely known “elderly model.” Her first shoot was an advertisement for Ford. The commercial was aired all over Asia, including South Korea. Her debut was followed by appearances in ads for IHOP and Budweiser.

“I was so nervous when I was auditioning for a role at an ad agency in front of the director,” Jeong said. “I was relatively old and there aren’t many Asians in my age who speaks fluent English. My friends in Korea saw the ad and they called me about it.”

Jeong said that the Korea Daily’s opinion section is her favorite. “The writers are sophisticated in their approach with critiquing, but also objective and clear,” she said.

A few years ago, Jeong was involved in a car accident in front of the Korea Daily’s office. Her car was struck by another car driven by a Latina lady. “I was shaking in fear, but the Korea Daily employees came out of their office to help me out. I’m always thankful for their newspaper,” she said. 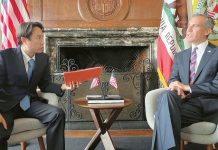