PYEONGCHANG, Gangwon — Described as a “castle” by BTS’s Jin and a “mansion” by J-Hope, the filming site of the band’s hit series located near the resort complex of Phoenix Pyeongchang is a feast for the eyes — especially in the wintertime. 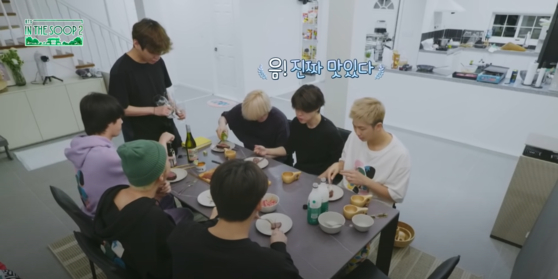 Last August, entertainment agency HYBE announced that it would open the location to the public, through package tour programs offered and managed hand in hand by the resort complex Phoenix Pyeongchang.

Titled “In the Soop Stay,” the package has been available since September and earlier this month, its winter-themed programs kicked into gear.

“In the Soop BTS ver. Season2” was created by HYBE and premiered in October 2021. During its five-episode run, it follows BTS taking a summer vacation in a remote spot located in the woods, hence soop in the title, which means “forest” in Korean.

The “In the Soop” series first aired in 2020. The first season also centered on BTS and later had two more spin-offs — one featuring boy band Seventeen and another starring the “Wooga Fam,” a celebrity friend group comprised of V, Park Seo-joon, Park Hyung-sik, Choi Woo-shik, and Peakboy.

In September 2021, local media reported that HYBE had bought the Pyeongchang land where the filming took place for roughly 1.3 billion won ($1.01 million). HYBE built the lodgings for the sake of filming the reality show.

“In the Soop Stay” targets ARMY, but any visitor can appreciate the luxurious property where the members of BTS were able to unwind for a while and show fans more intimate, personal moments.

BTS spent four days reading, cooking, playing video games, working out, and painting during their stay in three white villas that also have facilities such as a swimming pool, a trampoline, a large yard, and a basketball court in season two.

For ARMY, the icy cold weather is not enough to prevent them from traveling across the country to Pyeongchang to experience how the BTS members spent their days in the area.

“In the Soop Stay” particularly appeals to avid fans of “In the Soop BTS ver. Season 2” as it provides a chance to actually see where and how BTS spent those four days.

In order to get to the secluded countryside setting, an “In the Soop”-themed green shuttle bus service is provided by Phoenix Pyeongchang. For the 30-minute journey, the bus blasts BTS’s music as it winds along the steep, snowy roads.

Pyeongchang is well-known for skiing and snowboarding as the county tends to stay covered in snow all winter long, and the Soop filming location was no exception.

When the show was filmed in the summer the majority of the grounds were grassy. Now, a blanket of snow covers the entire grounds. While a snowball fight might seem tempting, the piercingly cold air forces visitors to escape inside to the cozy manor-like buildings.

Main Building A is where the seven members hung out in the living room, kitchen and library across two floors and remains almost exactly the same as it originally was.

Items used by the members, like J-Hope’s toy airplane, Suga’s guitar, V’s trumpet, and Jungkook’s punching bag, are scattered throughout the building and test visitors’ knowledge of how well they remember which member used what during the show.

For those who struggle, many of the related scenes are on display in photographs.

One photo-op spot that is a must-see is the second-floor library space of the main building. A large horizontal window offers a wide crystal clear perspective of the mountains, which gives off a sense of healing and peace of mind.

It is the same panorama RM marveled at while reading as he sat in one of the armchairs that faced the window in the show.

The other two villas, residence buildings B and C, where the seven members slept, are also open to the public view.

The interior of the three buildings was arranged like an Easter egg hunt, with plush toys of Soopy, the tree-inspired green mascot for the series, spread across various rooms and quotes from BTS scribbled on the walls.

Some special additions have been installed, such as an instant photography booth where you can choose one member to take a snap with. The photo cards are the perfect souvenir for you to take home.

During the hour-and-a-half tour, those with a keen eye will notice that the computer room, where the members played video games, is not being exhibited, and that Jin and Suga were the only two members who had to share a bathroom.

While the chairs or sofas are free for visitors to sit in, the tour program does not allow you to sit on the seven members’ beds. Visits to the filming location are currently only available on weekends until the end of February due to the weather, according to Phoenix Pyeongchang.

Starting in March, when it becomes warmer, the tour will go back to running every day and the resort plans to release spring-themed packages then.

“In the Soop Stay” involves a one-night stay at the Phoenix Hotel and greets visitors with a welcome gift set, consisting of “In the Soop” merchandise such as BTS photo cards, blankets, indoor slippers, a postcard, fabric perfume, and a pouch.

Phoenix Pyeongchang set up a gift shop inside its Center Plaza building that sells a wider variety of goods related to the show.

The “Soopy Lounge,” nestled within the Phoenix Pyeongchang estate, is tent-shaped cabins all guests are able to rest in outside. Each tent comes with a heater and cushions and is free to use at any time.

As the two-day trip drew to a close, it was obvious why “In the Soop Stay” was sold out for all of September to November. It’s arguably one of the best ways the ARMY can have a memorable BTS-themed adventure.

The purchase of the “In the Soop Stay” package program is required for all the aforementioned activities. The filming site tour takes place five times a day on the weekends and the shuttle buses operate according to reservations. Individual visits are prohibited. For more information, visit Phoenix Pyeongchang’s website, which is also available in English.