The Incheon District Court on Friday started reviewing an arrest warrant request for a 27-year old American accused of breaking into subway garages and spray-painting graffiti on trains last year.

The unnamed American was extradited to Korea on Wednesday from Romania. An Interpol red notice was issued and on Nov. 12, and the American was arrested by local police in Romania.

The American covered his face with a baseball hat, glasses and a face mask in his court appearance Friday.

The man and an accomplice identified only as a 28-year old Italian are accused of breaking into nine subway garages in Seoul, Incheon and Busan between Sept. 14 and 24. 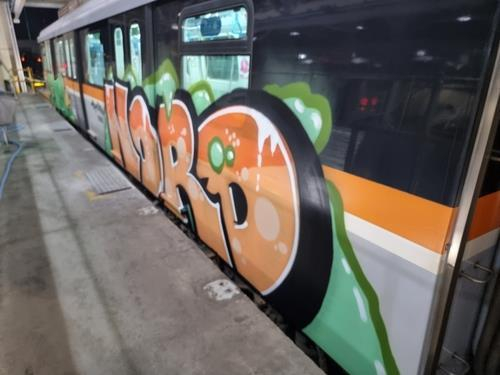 A suibway car with graffiti. A 27 year-old American and a 28 year-old Italian is suspected of painting the cars last year. [iNCHEON TRANSIT CORPORATION]