Office of Los Angeles Mayor Eric Garcetti has admitted the claim about using a blacklist to prevent local Korean-Americans from attending the homeless solutions workshop.

On July 26, the Office of Los Angeles Mayor Eric Garcetti responded to continuous requests to explain about the blacklist by stating, “We apologize and regret how this was handled.”

The “blacklist” controversy was first raised when the Mayor’s Office of Public Engagement held Homeless Solutions Workshop on June 5 and 11.

The notice only gives RSVP information, contradicting to how the city office later claimed that the workshop was “by invitation only.”

On the day of the event on June 5, the office made phone calls to three Korean-Americans who made the reservations and notified that the workshop was by invitation only. At the door, they regulated the entering, showing a list which included Korean names.

At that time, Deputy Press Secretary Anna Bahr explained, “the meeting was sponsored by a Jewish organization to share strategies to deal with homeless issues with leaders of religious groups in West Los Angeles.”

“The workshop was by invitation only, and the event on June 11, too, invites specific residents in West Los Angeles,” she added.

The truth about “Korean blacklist” was confirmed as Wilshire Community Coalition requested information, which included emails and others, from the office based on Freedom of Information Act.

According to the received material, advisors at the mayor’s office requested a Korean advisor for the identifications of Koreans who made their reservations. Furthermore, representative Daniel Tamm, who was in charge of the reservation, sent an email to the supervisor at The Jewish Federation of Greater Los Angeles, which included a list of names to be banned to enter the building.

“It is such an unfortunate happening,” Jeong added. “It’s a serious problem that the mayor of Los Angeles has excluded a specific racial group.” 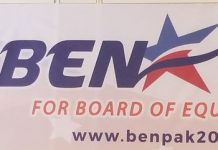